A Tale of Two Saturdays

February 19 was a mild winter Saturday in Wisconsin. The sun was out, and the temperature rose above freezing. There was an organized rally of Scott Walker supporters, which drew a couple thousand extra people to the Capitol square. Police estimated the total crowd at 68,000. 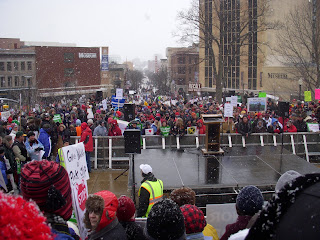 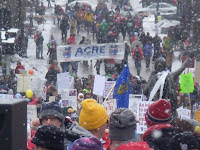 February 26 was cold (the high was 19 degrees) and snowy. There were only a few Scott Walker supporters' signs visible, and the total crowd was at least as large (possibly larger) than the Saturday before. Once again, everyone was peaceful and well-behaved. There were many children and dogs in attendance, well bundled against the cold (even many of the dogs were wearing coats).  I am glad to see people bringing their kids, not because I think it is necessarily educational for them, but because it reminds everyone to behave like responsible adults. That and the lack of alcohol has made these the most family-friendly festivals the Capitol Square has ever seen.  The snow yesterday made it look like a winter carnival. 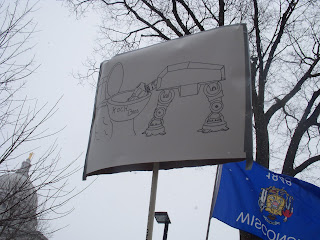 The "Imperial Walker" imagery has really taken off.  It continues to be used in new and creative ways.
Posted by Ordinary Jill at 9:02 AM 6 comments:

MTV will be in Madison tomorrow holding an open casting call for The Real World. Maybe Scott Walker should audition.  After all, he loves to be on television, and a stint as a Real World cast member didn't hurt Sean Duffy's political career.
Posted by Ordinary Jill at 7:52 AM 2 comments:

Stephen Colbert created a new "Turmoil in the Middle West" graphic for this story:

He also implied that he will be in Madison on Tuesday, but he may have just meant that he will continue covering the story.

On The Daily Show, Wisconsin's protests were called the Bizarro Tea Party. John Oliver was in Madison on Monday to cover the story (maybe that bit will air tonight).

The City of Sheboygan has not realized the expected revenue stream from the Blue Harbor conference center.

Las Vegas is a cautionary tale of irrational exhuberance in the hotel construction business.  What do they think a new Marcus Hotel adjacent to Monona Terrace will do to the Edgewater's occupancy rate?

Wisconsin Rapids' only hotel with a conference center was several months delinquent on both room taxes and property taxes and has just gone into foreclosure.  The Edgewater TIF "loan" (actually a hand-out) was justified with inflated projections for both room and property taxes.  I doubt the city will see anywhere close to that additional revenue, and taxpayers will be left holding the bag, much like in Wisconsin Rapids.
Posted by Ordinary Jill at 7:15 PM 6 comments:

Scenes from a "Riot"

Paul Ryan keeps using that word.  I don't think it means what he thinks it means.

Ground zero for the clashing "mobs" on Saturday was the King Street entrance to the Capitol Square, where the Tea Party Rally was held, and pro-Walker demonstrators had to pass by the "union thugs" ringing the square.

As you can see, it's an urban terrorscape.  Actually, it reminded me of Taste of Madison, only with less humidity.

Some "union thugs" brought attack dogs to intimidate the crowd.

This guy was frequently photographed. Sometimes he wore the belt, sometimes he held it up like a sign.

The small sign above the American Postal Workers banner in this picture is my favorite. It says: "They can have their tea party. I'm a Wisconsinite and I want a kegger" 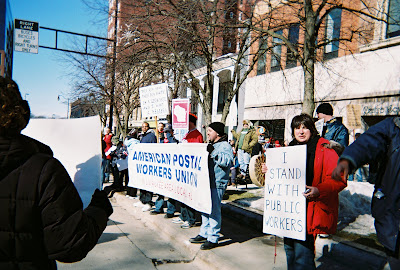 It has recently been pointed out that Wisconsin State Senators who were last elected in 2008 are already subject to recall.  The list of relevant Republicans is:

Now, some of these politicians couldn't lose an election in their home District if they were photographed in a compromising position with a Russian spy.  However, a few of them just squeaked by in 2008.  Granted, that was a bad year to be a Republican, but the emotions on the left are running high again, and a left-leaning answer to Citizens for Responsible Government may want to warm up their recall muscles on some low-hanging fruit.

Looking back at the 2008 election results, the Senators most likely to be Petak'd are:


Although the other two enjoyed slimmer margins, Kapanke may actually be the most vulnerable, because he has always enjoyed the support of organized labor (which he will lose when Walker's bill comes to a vote).

If progressives could pull off a recall hat trick, that would end the Republican control of the State Senate.  Anyone in District 8, 18 or 32 want to file some paperwork?
Posted by Ordinary Jill at 9:19 AM 4 comments:

This is exactly the sort of thing I've been trying to point out to people who say that cutting the public sector payroll doesn't remove money from Wisconsin's economy because taxpayers will have more money in their pockets.  I think RS is pretty sharp about a lot of things, but he really missed the boat when he said (about halfway down the list of comments to his post): "Your wife is paid with funds collected by government from the public as a whole. If your wife takes a $2,000 hit, it doesn't mean that $2,000 disappears from the economy. It means that $2,000 is simply able to be spent (on newspapers, and cars, and Brewers tickets) by people from whom the money is no longer being collected - maybe your neighbor down the street whose taxes will be lower going forward because he will be paying less for your family's benefits."

No, sometimes it means that $2,000 is able to be spent on outsourcing a local job to an out-of-state (or even overseas) contractor. The Alabamification of Wisconsin continues.
Posted by Ordinary Jill at 9:11 PM 3 comments:

Something else you can do

If you do find your compensation slashed by the budget repair bill and need to trim your household budget, you might start by not purchasing goods or services from the companies who are represented on the Board of Directors of Wisconsin Manufacturers and Commerce.

Music to Protest By

Here is a brief concert for those who are heading out on Friday to demonstrate at the State Capitol.


And now for something completely different, downtown Madison institution Art Paul Schlosser captures a bit of history in this video (h/t Dane 101):

Posted by Ordinary Jill at 6:36 PM No comments:

Governor Walker will not give his budget address at the State Capitol, where the people's business is conducted. Instead, he will use the turf of a Madison agribusiness manufacturing firm.  That pretty much tells us whose budget we'll be getting.

As any political operative can tell you, the backdrop of a speech sends as much of a message as the words of that speech.  Mission accomplished, W.  All hail Wisconsin Manufacturers and Commerce, our new oligarchs.
Posted by Ordinary Jill at 8:03 AM 1 comment:

I'm a Member of an Elite Group

I'm among the 10% of Wisconsin voters who will participate in Tuesday's Wisconsin Supreme Court primary. (h/t Illy-T).

It's strange that more Wisconsinites aren't eager to be among the illuminati who shape our highest court. The low turn-out in these elections has made it easy for Wisconsin Manufacturers and Commerce to buy seats on the court. They know how to turn out their base.

I bet if the cool night spots in Madison and Milwaukee held special VIP parties for those who vote in February and April elections, we'd see a lot more young people getting off their asses and doing their civic duty. After all, they're not averse to standing in line to get into a bar on Saturday night.

If you have "liked" a Facebook page having to do with recalling Scott Walker, you might want to try to defeat Justice Prosser (who has promised to "complement" the acts of the Republicans in the Executive and Legislative branches) or you might find yourself spouting on your blog about a Wisconsin equivalent to a "Bush v. Gore" decision next year.  Of course, it's far easier to spend hours spouting online than to actually leave the house and spend ten minutes voting.  Especially if you're more interested in getting attention and virtual *hugs* from your friends than actually contributing to change.
Posted by Ordinary Jill at 9:27 AM 2 comments:

Governor Scott Walker appointed Stephen Fitzgerald, the 68-year-old father of Wisconsin's top Republican legislators, to head the State Patrol.  Even the Wisconsin State Journal thinks it doesn't pass the smell test. The elder Fitzgerald can now pad his pension and retire on his own schedule.  One would think that Scott Walker would know that insider deals to boost public pensions can come back to bite an executive in the ass. He must be counting on the anger-diffusing power of a Green Bay Packer Superbowl victory.

In other State Patrol news, the security detail assigned to the Governor's family will be increased from four to six.  The reasons cited involved the family's two teen-age sons, who are still living and attending school in Wauwatosa.  Their mother splits time between Madison and 'Tosa, and their grandparents will soon be moving in to help out.

In the meantime, it must be a tremendous relief to the concerned parents that a couple of dedicated State Patrol officers will be keeping an eye on the boys and chauffeuring them around.
Posted by Ordinary Jill at 7:08 PM 11 comments:

Apparently, illegal cockfights are insufficiently bloody for some people, so they actually strap knives to the combatants' legs.

What could possibly go wrong?

There may be a Darwin Award nomination here.
Posted by Ordinary Jill at 8:03 AM 2 comments:

Hotels in Green Bay are full of Packer fans who couldn't afford the trip to Dallas.  All over Wisconsin, pre-game parties will be starting long before the game.  Since it's the weekend, we may has well start the celebration now.  To get you in the mood, here is Higher Education's Feelin' So Fly Like a Cheesehead:

For those of you who aren't into hip-hop music, here is Pat McCurdy's We Love the Green and Gold.  It's a fun video full of Wisconsin cultural touchstones (and, inexplicably, Larry the Cable Guy).

Madison's Mayor claims that it's OK to give Trek a no-bid contract with money out of the city's contingency reserve for a bike-sharing program because their subsidiary B-Cycle will make no profit on the deal.

In 1997, Elton John remade his hit song "Candle in the Wind" to honor the late Diana, Princess of Wales.  He donated all of his royalties from "Candle in the Wind 1997" to the Princess Diana Memorial Fund.  However, sales of the song also boosted sales of Elton John's back catalog, which made quite a bit of money for the singer, as well as introducing him to a whole new audience.

The McDonald's Corporation sponsors the very worthy Ronald McDonald House charity.  However, it spends more money on ads promoting its link to the charity than it does on the charity itself.

My point is that charitable endeavors by corporations often have a hidden marketing motive.  I have no doubt that the B-Cycle balance sheet will show the program losing money for Trek.  However, that balance sheet will not show increased sales of Trek bicycles resulting from increased bicycle ridership in general and exposure to Trek bikes in particular.

Trek is not eager to do this because they want to give back to the community. Corporations have a fiduciary responsibility to their shareholders to make a profit.  If Trek could not justify the program to its shareholders, it would not exist.  Nor are they the only bike company capable or interested in such programs.

I agree with Paul Soglin on this one.
Posted by Ordinary Jill at 7:37 AM No comments: