The End of Hip Hop

This campaign video for Rick Perry is so bad that one wonders if it was actually planted by someone in Mitt "Bling-Bling" Romney's campaign. (h/t The Mahablog)


Of course, it could also be an attempt by these two lovely but otherwise untalented young women to find wealthy Republican sugar daddies.  Hope they have better luck than Stacie Long did.
Posted by Ordinary Jill at 7:50 AM No comments:

Tiptoe Down the Sidelines

That was some very graceful footwork by Nick Toon on Saturday.  He should be nicknamed Il Ballerino.
Posted by Ordinary Jill at 7:31 AM No comments:

Apparently, Nass would have liked the police to arrest not only those who were breaking laws, but also those who were peacefully assembling. If the police had treated the protestors like their counterparts did during the Vietnam War era, things never would have escalated.  Oh, wait...
Posted by Ordinary Jill at 6:23 AM 4 comments:

There is an apartment complex on the east side of Madison called Camelot apartments, with an adjacent strip mall called Camelot Square.  The bus shelter on Johnson Street that borders the property used to have a sign that said "Camelot Station" but I don't remember seeing that signage in recent years.

The property is older, and the neighborhood has had its problems.  I'm sure the name "Camelot" was not meant to inspire mayhem with swords.  Last month, store owners held a "Camelot Square Festival" to bring some positive attention to their businesses.

Sadly, more recent news stories have not been positive. There was a fatal shooting in the apartment parking lot last week, believed to be a drug deal gone bad.  And yesterday, there was a fire in one of the apartment buildings (no one was injured, fortunately).

I hope things turn around for Camelot.  I still stop by now and then to indulge my craving for Chocolate Shoppe ice cream.
Posted by Ordinary Jill at 7:57 AM 1 comment:

Legalize Marijuana.  It won't create nearly as many jobs as we need, but it's a start. It will also save some scarce law enforcement resources that are now directed toward busting family farm operations and provide a new source of revenue for our cash-strapped state and federal governments.  It will also allow profits from Wisconsin growing operations to be reinvested in Wisconsin rather than siphoned off by Mexican drug cartels.

If Tammy Baldwin wants to make a legislative splash in Congress prior to next year's Senate race, she should be introducing legislation (or at least signing onto something from Barney Frank or Ron Paul) that would do away with federal marijuana prohibition.
Posted by Ordinary Jill at 8:50 AM 3 comments:

There is no one more attractive to voters than a blank slate non-politician, on whom they can project all of their hopes and dreams, imagining the candidate shares their own opinions and priorities.
Posted by Ordinary Jill at 7:39 AM No comments:

I find it ironic that some of the same conservatives who complain about the secularization of Christmas are now complaining about attempts to keep Labor Day observances about labor and its organizers.  Just as John Stewart described the demonstrations at the Capitol in February as "the Bizarro Tea-Party," we now have a mirror image of the December holiday culture wars.

With that in mind, this sign practically created itself: 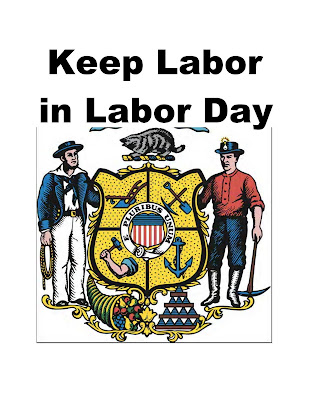 The Packers cut Brandon Underwood.  We no longer have to worry about his annual off-season embarrassing arrests.
Posted by Ordinary Jill at 8:44 AM No comments:

Texas Governor Rick Perry famously asked his supporters to pray for rain to end Texas' record drought. One named storm after another has either teased Texas or bypassed it entirely.  The latest is Tropical Storm Lee.


The water-logged Lee was tantalizingly close to Texas but hopes dimmed for relief from the state's worst drought since the 1950s as the storm's forecast track shifted east. Forecasters said it could bring drenching rains to Mississippi and Alabama early next week.

The most logical conclusions are either:
1. Prayer has no affect on weather; or
2. God hates Rick Perry.

However, I'm sure that Pat Robertson will somehow blame it on the Supreme Court striking down Texas' sodomy law.
Posted by Ordinary Jill at 9:19 AM No comments:

About that Mascot Controversy

Many citizens of Berlin (the one in Wisconsin, but not to be confused with New Berlin) are upset that they are being forced to give up their traditional Indians team name. They are convinced that there is nothing offensive about a bunch of white kids pretending to be Native Americans; indeed, it is a tribute, to their way of thinking.

I wonder if they (or Rep. Steve Nass) thought the Galesville-Ettrick-Trempealeau Redmen were a tribute to Wisconsin's first residents.  Or that 19th century minstrel shows were a tribute to African American music and dance traditions.

For the record, I believe that the name Fighting Irish is also deeply offensive, and the NCAA should force Notre Dame to get rid of it just as they forced schools to drop other race-based team names.  I also think think the NFL should follow suit and retire the names Redskins and Chiefs.

On the other hand, Vikings are not an ethnic group but rather an occupation, like Pirates (or Buccaneers).
Posted by Ordinary Jill at 7:48 AM 6 comments:

A Surfeit of Thursday Night Football

Football is usually played over the weekend -- Friday night for high school, Saturday for college and Sunday for the NFL.  The NFL also has Monday night games and, occasionally, Thursday night games.

However, like a blockbuster movie, college football's opening weekend starts on Thursday night.  Tonight, the Badgers will take on UNLV in ESPN's premiere game of the season.  The inherent drama in this game will be the question of will the Badgers cover the spread?


By an unfortunate coincidence, the Packers' final pre-season game will be played at the same time.  Really, NFL?  You had to schedule the Packers opposite the Badgers?  I noticed that the Packers also play on New Year's Day.  Fortunately, the major college bowl games will be held on Monday, January 2 instead.

Next Thursday night, the Packers will open the NFL season against the Saints.  The Badgers will be back to their usual Saturday slot.  Clearly, John Boehner is not a football fan.
Posted by Ordinary Jill at 7:38 AM 2 comments: