Who Needs a Working Liver and Pancreas Anyway?

AstraZeneca is now pushing its anti-cholesterol drug Crestor for healthy adults as a preventative measure.  It slightly lowers the risk of heart attacks and strokes.  However, it may increase the risk of diabetes.  Also, statins work by suppressing liver function (your liver naturally produces cholesterol).

If the drug companies had their way, everyone would be on at least three expensive prescription medications.  They've already convinced the American Academy of Pediatrics to push statins for children as young as eight years old.

The Food and Drug Administration is a weak watchdog at best.  Remember Vioxx?  It was approved, since drug companies are allowed to cherry-pick the studies they submit to the FDA with their application.  Merck voluntarily pulled Vioxx off the market before the FDA got around to doing so, after the drug contributed to thousands of fatal heart attacks.  It was fear of wrongful death lawsuits, not FDA regulation, that motivated Merck.

Your doctor is not always a good advocate, either.  Everything your doctor knows about the brand-name pharmaceuticals on the market likely came from the companies that sell those pharmaceuticals.  The drug companies provide educational materials to medical schools, as well as grants to attend continuing-education conferences like Topics in Preventive Cardiology including Psycho-Social Issues Cruise Conference (a seven-night cruise from Hololulu) and Medical Ethics & Legal Medicine Southern Caribbean Cruise (oh, the delicious irony).

People need to realize that they are consumers of medical care just as they are consumers of groceries, electronics, clothing and beer. Take all television advertising with a grain of salt.  The first amendment allows advertisers to make exaggerated claims.  They will also try to circumvent your reason with an appeal to your emotions.  Caveat emptor.

If your doctor prescribes a drug, make sure you understand the risks and benefits.  There is a good chance that your doctor won't know about the studies that are less than favorable, since they were probably not discussed on that cruise conference he or she attended last winter.  Do some research.  Check out the British press, since European regulators often require more disclosure of unfavorable studies.

And if your prescription medication causes some unpleasant side effects, ask yourself if you really need to be on it before you decide to take a second medication to fix the problems caused by the first one.

And for the love of Pete, if you live in Wisconsin, think long and hard before you start taking statins.  You're going to need to keep your liver in good working condition.
Posted by Ordinary Jill at 8:28 PM 1 comment:

Some Ideas for Plan B

Today's Cap Times has an article on the problems generated by the popularity of the new Plan B nightclub on Willy Street.  The club owners have been very pro-active in working with the neighborhood, and they are seeking ways to contain the noise from dozens of patrons hanging around outside waiting to get in once the club has reached its capacity. There have also been complaints about the glare of headlights at closing time.

I have some thoughts.  In recent years, Disney World has used something called a "FastPass" to manage the lines for popular attractions.  Instead of standing in line for an hour or more, you go to a kiosk and get a ticket with a return time printed on it. You spend your waiting time elsewhere in the park (where the lines are shorter or non-existant), then come back during your time window and enter the attraction through the FastPass entrance.  The times printed on the tickets are staggered according to the park's expected attendance and the loading speed of the attraction.

Plan B could do something similar.  They could have a stack of tickets printed up ahead of time, with staggered return times (stacked in chronological order) based on the usual attrition rate for that night of the week (that is, the usual pattern of how long it takes for X number of people to leave the club per hour).  People who want to get in after the club is full are given a ticket with the earliest time they can return.  They don't have to worry about losing their place in line, since those who arrive later will be given tickets with later return times.  The backs of the tickets could have ads for other area establishments that are open late, encouraging people to hang out inside another bar or restaurant rather than outside in a residential neighborhood.  Thus, Plan B would be a good neighbor to other bars and restaurants as well as to the sleeping residents on their block.

They are also trying to work on building a wooden privacy fence to help with the noise and headlight issues. However, the owner of the apartment building next door complains that "a fence built right to the property line would squeeze access to his building and make it difficult to move furniture or appliances into the apartments."

How about a heavy vinyl curtain (made of the same material used for commercial banners) rather than a wooden fence?  It would be flexible enough to allow furniture and appliances between the buildings yet still deflect noise and light as well as a wooden fence.  Perhaps it would be prohibitively expensive, or perhaps a vinyl curtain that size would be too heavy to safely hang.  I don't know enough about the product to say.  Some kind of moveable barrier is what is needed.  Maybe something like a roll-top desk lid, mounted sideways?  It could be retracted during the day.

I hope Plan B works out the lingering issues and becomes a Madison institution every bit as beloved as the Cardinal Bar and the (late, lamented) Hotel Washington.
Posted by Ordinary Jill at 7:00 PM 2 comments:

Late last summer, Mayor Dave included $37 million in his capital budget for a grand new central library on West Washington, to replace the decaying building a few blocks away. He insisted that new construction rather than renovation was a better deal for the city, and he enthusiastically pushed his grand vision for the new development.

It turns out that the $37 million did not cover the actual development costs. Mayor Dave thought he could negotiate via the budget (a tactic pioneered by Milwaukee County Executive Scott Walker) and force Fiore-Irgens to lower its price after the city accepted its bid (narrowly chosen over one from T. Wall Properties). The Mayor and City Attorney kept the City Council in the dark during the futile negotiations. Now, some alders feel disrespected, and the Mayor has nothing to show for it.

Now that he's given up on his library project, I suspect Mayor Dave will go all in over the $16 million in TIF for the Edgewater project. It's his last chance to prove he's an alpha male. He's already had to give up his plan for trolleys, and he's deferred to Dane County on siting a high-speed rail station at the airport rather than downtown.

Just imagine what downtown Madison could be if we all shared Mayor Dave's vision: 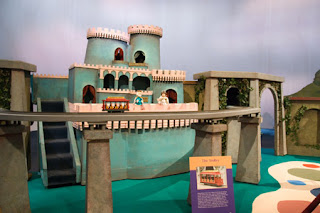 Will Wisconsin Wail on Woeful Woffard Once More?

Probably. But will the basketball Badgers beat the Terriers on Friday by a bigger margin than the football team did on September 19?  That remains to be seen.

EDIT: The Badgers very nearly embarrassed themselves. Not only was the game close, they barely scored more points than the football team did against Woffard.
Posted by Ordinary Jill at 7:59 PM 2 comments:

I was looking through the Madison Alcohol License Review Committee's incident report for February 17 through March 5. I see that Wiggie's had another burglary and another fight in that period.

Given the oddball nature of some past incidents at Wiggie's, these must have been too run-of-the-mill to get mentioned in the paper.  It will be interesting to see if anything newsworthy happens on April 30 this year (the date of the smash-and-grab TV burglary in 2008 and the gunfire-out-the-window incident in 2009).

Here is the entire report for the morbidly curious.  Here is page 86 of 90: 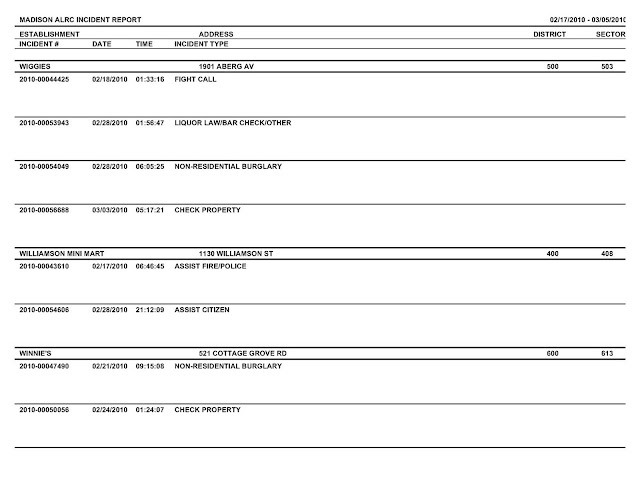 Competing to Sell our Souls to Big Brother

Madison is abuzz (pun intended) over Google's search for a guinea-pig city for its experimental high-speed fiber network. I find it amusing that, while someone started a Facebook page called "Bring Google Fiber to Madison Wisconsin!", apparently no one thought to demonstrate community support (one of Google's vague criteria for choosing the winning city) via Google's own shiny-new social network.

I am hesitant to be an early adopter with anything Google. I thought long and hard about opening a Gmail account. I admit I was creeped out from the start by the fact that Google's bots would monitor the content of my emails for advertising purposes. I'm of a generation that still read Orwell in high school. Americans have fought long and hard to keep our government from eroding our privacy, only to happily give it up to a private-sector corporation whose "Don't Be Evil" slogan is laughably ironic in the face of Google's Chinese ventures.

Google agreed to censor its search engine in China in exchange for the opportunity to enter the Chinese market (and gain lucrative advertising revenue thereby). Google (perhaps unwittingly, perhaps not) provided the totalitarian Chinese government with all sorts of incriminating information on democracy activists and other dissident citizens through those citizens' Gmail accounts.

Last month, Google signed up all Gmail users (not only without their permission, but even against their will) for their new Buzz social network, turning private email contacts into public followers. This was an attempt to leverage Google's market power in the web-based email world into market power in the world of social networking, all the better to sell you stuff. Does anyone doubt that Google will closely monitor all Internet traffic over their high-speed network and share the information with advertisers?

Remember how concerned civil libertarians were over the previous administration's warrantless wiretaps, and the big telecom companies' collusion (and subsequent request for immunity)? Google is on the way to having more information on Americans (law-abiding and otherwise) in its databases than the NSA, CIA and FBI combined. If the Chinese government could hack into its citizens' Gmail accounts, do you really think our government can't? Thanks to Google's search algorithms, fishing expeditions will be faster and cheaper than ever.

And why in the world is everyone assuming that Google will foot the entire $97 million construction cost for its test network? They cite both community support and resources as criteria. Don't you think they'll expect TIF money, or at least a property tax exemption? Jerry Frautschi taught Madison taxpayers that it's a good idea to look that gift horse in the mouth, since you'll be paying the dental bills.

In the Middle Between Life and Death