While braving the holiday shopping hordes over the weekend, I noticed a couple of young parents browsing in the adult novelty section of Spencer's Gifts at the mall.  I knew they were parents, because they had two young children with them.  While the baby in the stroller was probably oblivious to the sex toys at child's-eye level, I wouldn't assume the same for the pre-schooler.  Just wait until he tells Grandma about the funny toys that Mommy and Daddy bought.  Maybe one parent should have had gone into the store alone to make the purchase while the other stayed with the kids out in the mall corridor.
Posted by Ordinary Jill at 6:53 PM 4 comments: 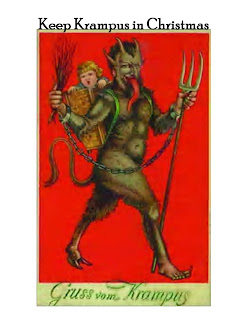 I've always found the "Keep Christ in Christmas" signs to be a little weird.  They seem more like political campaign signs than proselytizing. They also reveal an ignorance of the actual origin of Christmas traditions.

My attitude may have been shaped by the fact that, in our neighborhood, the guy who put out the KCiC sign every year was the same one who spent the summer telling all of his neighbors when and how they should mow their lawn and tend their garden (he always had an emphatic opinion about home repair projects, too).

For the Christmas Originalists, Heathens, Secular Humanists and ancient history buffs out there, here are some fun alternative holiday signs that you can print out and display if you are so inclined. 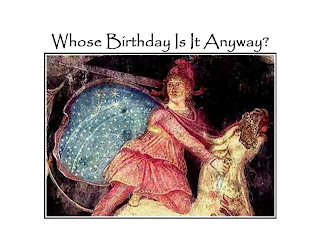 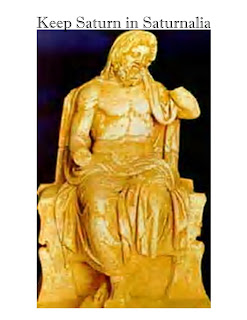 A Brief History of Christmas

It's getting to the time of year when a certain segment of the religious right -- the folks who think simple faith is preferable to studying theology and their own church history -- start whining about "The War on Christmas."  You will hear them complain about Neopagans and Secular Humanists co-opting Christmas for their own holiday celebrations.  Some of them will make statements about Christmas trees being inappropriate for anyone but Christians (or with any other name but Christmas tree).

There is no language in the gospels indicating that Jesus of Nazareth was born in December. In fact, the only seasonal clue -- the shepherds keeping watch over their flocks at night -- would seem to indicate that the nativity took place in the Spring, during lambing season (the only time of year in which shepherds spend the nights in the fields with their flocks).

Most cultures have some sort of celebration that is tied to the Winter Solstice.  The minor Jewish festival of Channukkah is overtly called "the festival of lights" and its theme is light lasting longer than expected.  The Jews' Roman occupiers celebrated Saturnalia, a multi-day festival that included family gatherings, feasting and the giving of gifts.

In addition to the official Roman state religion, many Roman soldiers practiced Mithraism, a mystery religion (meaning its doctrines were kept secret from all but the highest-level initiates) that originated in Persia. Our knowledge of Mithraism is sketchy (since it was a mystery religion that completely died out in ancient times), but we know it involved a god named Mithras who was born on the Winter Solstice and later sacrificed a celestial bull to save mankind from the darkness.

When Christianity became an official State religion of the Roman Empire, it began to compete openly with the existing pagan religions for followers.  Forcing people to give up their cherished holiday traditions is no way to win converts.  Thus, the church decided that Jesus was born on December 25 (the Bible didn't directly say otherwise, after all), and declared that the faithful could celebrate the Nativity with a Christ Mass and feast. The Saturnalia traditions were largely absorbed into the 12-day Christmas celebrations (culminating with Epiphany, which commemorates the visit of the Magi with their fabulous gifts).

Northern European pagans had their own Solstice celebrations.  The Scandinavian and German peoples burned a Yule log to represent the returning sunlight and brought evergreen trees (tannenbaums) inside, because they defy winter by remaining lifelike rather than dropping their leaves.  When Christian missionaries proselytized among the northern tribes, they let them keep their old traditions, attaching them to the new Christmas celebrations.

After about 1500 years, Christmas traditions are indeed venerable.  However, it is ignorant to assume that Christians have a monopoly on December celebrations, or that non-Christians have no right to decorate evergreen trees and exchange gifts.

Did Scott Walker deliberately mislead people in order to attract train-skeptic votes and road-builder campaign funds?  Or did he really believe his own bullshit?  He told everyone that, with the support of Wisconsin's Congressional Delegation, the funds could be re-purposed.  Now, Wisconsin's Republican Congressmen are going through the kabuki theater of introducing a bill to do just that.  However, one look at the equation above will tell you they have no chance of success.

In contemplating Walker's inner thought processes, I am reminded of a quote from Homer Simpson: "Just because I don't care doesn't mean I don't understand."
Posted by Ordinary Jill at 7:43 AM 2 comments:

As the holiday shopping season gets into gear, remember that buying cheap goods made in China contributes to our trade imbalance, the "creative destruction" of American jobs, and global carbon emissions (both from coal-burning power plants in China and from the container ships transporting the raw materials and finished products across the ocean).

It's almost impossible to avoid buying products made wholly or partly overseas.  However, if you are willing to make the effort to buy American where you can, this website is very useful.  With so many of our friends and neighbors out of work, the holidays will be merrier if you support local businesses as much as possible. Buy books and DVDs from a bricks-and-mortar store rather than online (if you sign up for coupons, it can be just as cheap). Give gift certificates for services.  Your grandmother doesn't need more perfume or dust-collecting knick-knacks, but she might enjoy a day of pampering at a salon or day-spa, or a dinner with the family at a nice restaurant.  Studies have shown that people who spend their money on experiences rather than things tend to be happier.

Many of us make charitable contributions during the holiday season. There are a great many very worthy charities that do a lot of good with those contributions.  There are also charities that spend more money on fundraising than they do on the programs that help those in need. The American Institute of Philanthropy does an excellent job of researching charities and helping donors get the most bang for their buck.  Their website lists top-rated charities in a variety of categories.  For a small donation, you can subscribe to their Charity Rating Guide, which gives more detailed information about how much various charities spend on fundraising and administration versus services.

Finally, if you are starting to make 2011 vacation plans, think seriously about visiting Las Vegas or New Orleans.  Both are terrific cities for visitors, and both have been hit harder by the recession than many other places. Las Vegas was ground zero for the real estate bubble, and New Orleans' fishing and offshore drilling industries took a big hit after the Deepwater Horizon explosion, just as the area was beginning to bounce back after Katrina.  Both places can be affordable vacation destinations if you avoid their peak tourist season and patronize the restaurants that target locals rather than tourists.
Posted by Ordinary Jill at 9:29 AM 12 comments:

Wiggie's under scrutiny over increased violence

It appears that I missed reading about a couple of recent incidents. There was a knife fight in the parking lot on October 23, and a report of a customer showing a gun and a knife late on Saturday night (a day after the gunfire incident).

The article states: "Dane County Board Sup. David Wiganowsky — who twice ran for County Executive and recently said he may seek the post again when the current executive steps down soon — is scheduled to meet Tuesday with an assistant city attorney and police department representatives."

How long will it take Wiggie to complain that the investigation is politically motivated?  Of course, he may have a point.  There was plenty of reason to investigate his dangerous dive last year. My personal favorites were the 17-year-old girl who swung a baseball bat at another patron and the woman who assaulted two different men on different nights with a pool cue.

Dorothy Borchardt may have the solution. (h/t Brenda Konkel).

Maybe this investigation is part of the process to sell the City Council on the idea, or perhaps to lay the groundwork to seize the property and save the purchase price. Time will tell.
Posted by Ordinary Jill at 6:31 PM 3 comments:

It's been over a year since I read about a gunfire incident at Wiggie's. Clearly, they were overdue.
Posted by Ordinary Jill at 3:37 PM 2 comments:

This is my favorite 80s song of all time, Stand and Deliver.  Enjoy.

Posted by Ordinary Jill at 6:44 PM No comments:

That's how long it took me to vote this morning. That includes the time to drive to and from my polling place. It would have been shorter, but the city once again scheduled construction over election day to block access to the Warner Park Community Center from North Sherman Avenue.

It did seem more crowded than I expected.  There wasn't a line, but the booths were mostly occupied.
Posted by Ordinary Jill at 7:02 PM No comments:

The Enemy of My Enemy Is My Friend

There is an ancient saying that is translated into modern English as "the enemy of my enemy is my friend."

This philosophy is likely responsible for the popularity of Ron Johnson among the state's Tea Party voters.

Johnson has proven to be a liar and a hypocrite on the subject of entrepreneurship (he earned his money the old-fashioned way -- he married it), government-sponsored health care (he took his daughter to a state-university-owned hospital in Minnesota for her surgery and has encouraged his employees to enroll in BadgerCare) and Randian economics (he sought government-subsidized bonds and railroad tracks for his company and stimulus funds for the Oshkosh Opera House, on whose board he serves).  He has flip-flopped on the subject of gun control (originally stating that gun owners should be licensed like drivers, until he learned that position was anathema to his base). He has approved outright lies about Russ Feingold's record.

Feingold, on the other hand, is one of the Senate's staunchest supporters of 2nd Amendment rights (he even filed an amicus brief on behalf of McDonald in the recent McDonald v. Chicago case). He famously voted against the USA Patriot Act.  He often votes against his party, though as a liberal Democrat, he is in agreement with (and therefore votes for) most of their legislative agenda.

It is those liberal leanings which have earned the ire of the Tea Party.  If Feingold's only opponent on the ballot were Beelzebub, the Prince of Darkness would have their vote.
Posted by Ordinary Jill at 7:27 AM 8 comments: