The Prescience of The Onion 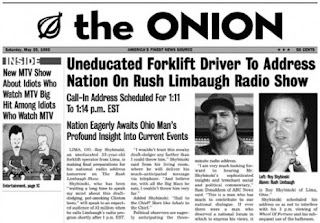 Wonkette pointed out this article from "Our Dumb Century" -- which was published nine years ago.
However, this is not a new phenomenon. The Onion has been frighteningly prescient for a long time. Most famously, in January of 2001, they ran this article (Bush: 'Our Long National Nightmare of Peace and Prosperity Is Finally Over.'): http://www.theonion.com/content/node/28784
This article originally appeared in March of 2002, over a year before we invaded Iraq (Military Promises 'Huge Numbers' for Gulf War II: The Vengeance): http://www.theonion.com/content/node/27905
And this item appeared in February of 2004, before the product-marketing trend of razorblade proliferation got completely out of hand (Fuck Everything, We're Doing Five Blades): http://www.theonion.com/content/node/33930
Many of the Onion’s writers used to work for that advertising agency in Madison that created the amusing window signs for Badger Liquor. I believe that is the secret to their prescience. Nowadays, more and more corporations (and governments) turn over decision-making to their marketing departments, so it takes an ad-man (or ad-woman) to realize what’s coming next.
So, does that mean we can use The Onion as an oracle? Which one of this week's articles is most likely to come true in the next several years? My vote is this one (Bill Clinton Starts Own Presidential School): http://www.theonion.com/content/news_briefs/bill_clinton_starts_own
Posted by Ordinary Jill at 6:59 PM No comments:

Sarah Palin is now bringing Joe the Plumber along to her campaign rallies, calling him "a fellow Alaskan" (he spent a few years living in Alaska) and a "fellow military man" (when was Palin in the military?).

Rumors in the blogosphere have it that Sarah Palin is already looking forward to running for President in 2012. Looks like she's already picked her running mate.
Posted by Ordinary Jill at 6:46 PM No comments: 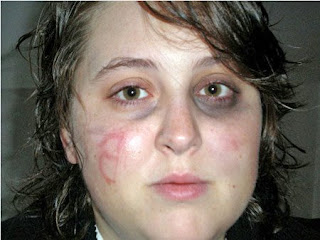 Ashley Todd, the 20-year-old McCain campaign volunteer (and former Ron Paul supporter) from Texas who tried to bait the rednecks in western Pennsylvania by claiming to be mugged by a black male McCain-hater in Pittsburgh. She added verisimiltude by blackening both of her eyes and carving a "B" on her cheek. Unfortunately, she used mirror-writing. She also claimed the incident occurred in front of an ATM, oblivious to the fact that there are usually survelliance cameras posted in front of ATMs.

While her hoax was far less elaborate and time-consuming than Audrey Seiler's, she got points for the high level of attention she attracted from the public, the media and even her chosen candidates (McCain and Palin both reportedly called her to express their sympathy before she confessed the truth).
Posted by Ordinary Jill at 7:34 PM No comments: