In the years following World War II, the United States prospered. Our economy grew, and our life expectancy lengthened. Infant and child mortality plummeted. This era of improvement owed much to the rise of labor unions and the rise of vaccination. Polio was finally eradicated from the United States, and smallpox was eradicated from the entire world. Whooping cough and rubella became unknown to many American families. The blue collar middle class raised healthy children and could afford to send them to college.

Vaccines protect populations in two ways. Those who are themselves vaccinated get the strongest protection. However, those unvaccinated members of the population also benefit from "herd immunity" -- the lack of sufficient potential hosts in the surrounding community. Herd immunity is sufficient to protect the small percent of the population who cannot be vaccinated for medical reasons (primarily very young babies and those with compromised immune systems).

Unions similarly provide "herd immunity" to an economy, when membership numbers are high enough. Union workers earn significantly more, on average, than non-union workers in similar jobs.  However, even non-union workers benefit when employers must compete with union shops for the same labor pool. On the Las Vegas strip, Sheldon Adelson's casinos are famously non-union.  However, he must compete with his unionized neighbors for employees, so his pay and benefits are comparable to those negotiated by the Culinary Workers Union.  Adelson plans less largesse in Spain, where he got the government to exempt him from many of their labor regulations and allow him to import low-paid guest workers from Morocco for his proposed Euro-Vegas complex.

In recent years, the anti-vaccine movement has been growing, and union membership and clout have been declining.  Both trends have thrived on ignorance (of medical science and of history and economics). As a result, once-rare diseases are making a comeback, and Americans' standard of living has been in decline:


In short, even though an hour of work by the average worker produced close to twice as much in 2007 as in 1975, his/her hourly wage declined...Between 1949 and 1974, the workforce became twice as productive and, at the same time, the hourly  wage of production and non-supervisory workers rose 66 percent to $18.63 from $11.24.  Why such a drastic change after 1974? One key reason is that labor union membership was at historically high levels between 1949 and 1974...Since 1974, union membership has dropped precipitously. In recent years, less than 14 percent of workers worked under collectively bargained contracts.

Vaccines are not always effective, and they occasionally have unwanted side effects. However, most people have far better odds of survival if they are vaccinated, and society as a whole is much healthier when at least 93% of the population partakes.  Likewise, unions do not always perfectly represent the best interests of their members. Like all human institutions, they are prone to corruption. However, our nation was much better off when unions were strong. The people who buy into the voodoo economics of supply-side tax cuts and anti-union legislation have a lot in common with the ones who buy into Jenny McCarthy's anti-vaccination bullshit.

Famous libertarians Penn and Teller illustrate the logic and science behind vaccination:

Is WEDC a Kleptocracy or an Idiocracy?

The way I see it, there are only two possibilities:

1. WEDC was designed to be an opaque slush fund to transfer public dollars to Scott Walker's cronies in the private sector (in which case, mission accomplished); or

2. Scott Walker and his cronies in charge of WEDC are completely unqualified for such high-level positions of responsibility.

Either way, a lot of voters in Wisconsin ought to be feeling a great deal of buyer's remorse. High-speed rail would have been far less expensive to Wisconsin taxpayers than WEDC and would have created a lot more jobs.

I can't add anything else to what Tim Morrissey pointed out on the subject.
Posted by Ordinary Jill at 2:11 PM 3 comments:

The best quote about homophobia and misogyny that I've seen

Black Panthers co-founder and open carry advocate Huey Newton, in a speech given in 1970.  He was decades ahead of his time in so many ways.
Posted by Ordinary Jill at 8:31 AM 3 comments:

The United States is providing aerial refueling for France's military efforts in Mali and may start transporting troops from other African nations to support the effort.  The U.S. cannot provide direct support to Mali's government because it came to power in a coup, not through democratic means.

I find this deeply disturbing.  The U.S. is once again helping France to re-take one of her former colonies from insurgents and hand it off to an unpopular, inept dictatorship. The motive this time is to prevent Islamists from using Mali as a base to export jihad to other nations in the region. Fifty years ago, we were concerned about communism spreading from Indochina (Vietnam) throughout Asia.

While the French airstrikes have allowed the "government" to quickly retake urban bases, "The Islamists seemed to be pulling back further north into the trackless desert wastes and mountain fastnesses of the Sahara, from where some military experts fear they could carry on a hit-and-run guerrilla war against the government."

Perhaps we should all learn the French word for quagmire: bourbier.  The venerable French newspaper Le Monde is already using it.
Posted by Ordinary Jill at 8:33 AM 1 comment:

Quote of the Day

"Why would we spend countless taxpayer dollars on a Death Star with a fundamental flaw that can be exploited by a one-man starship?" - Paul Shawcross, Chief of the Science and Space Branch at the White House Office of Management and Budget, responding to a petition calling for the United States to build a Death Star. (h/t, Greenlee Gazette)

Making the most of the opportunity to trumpet the technological accomplishments of our military, Shawcross goes on to brag about "the Defense Advanced Research Projects Agency, which is supporting research on building Luke's arm, floating droids, and quadruped walkers."
Posted by Ordinary Jill at 8:13 AM No comments:

Math teacher Jake Scott from Silver Spring, Maryland, has come up with some well-produced rap videos to help his students learn about quadratic equations and trigonometry. I suspect these kids are too young to remember Multiplication Rock.
h/t NPR.
Posted by Ordinary Jill at 6:36 PM No comments:

The NRA Jumps the Shark

Owning an assault rifle did not make Nancy Lanza safer in her home.

Having armed citizens in the crowd did not stop Jared Loughner's killing spree.

Yet, the NRA keeps peddling the same snake oil that an armed society is a safer society, this time washed down with a chaser of unfunded mandate for our cash-strapped schools.

Too many children are already killed accidentally by guns in their homes (or in their parents' cars). Having more children in close proximity to guns at school on a daily basis will inevitably result in more tragedies.

All the NRA cares about is boosting gun sales.  It's only a matter of time before they advocate arming schoolchildren.

Am I the only one who thinks that Wayne LaPierre could have modeled for the creatures in They Live? 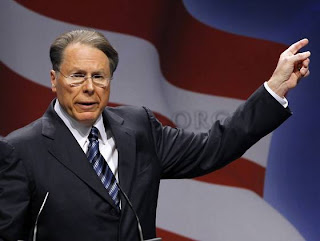 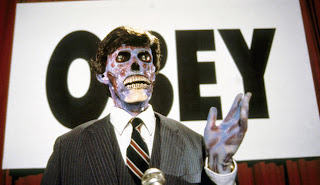 Posted by Ordinary Jill at 5:25 PM No comments: